Own Your Sluttiness / TEXT 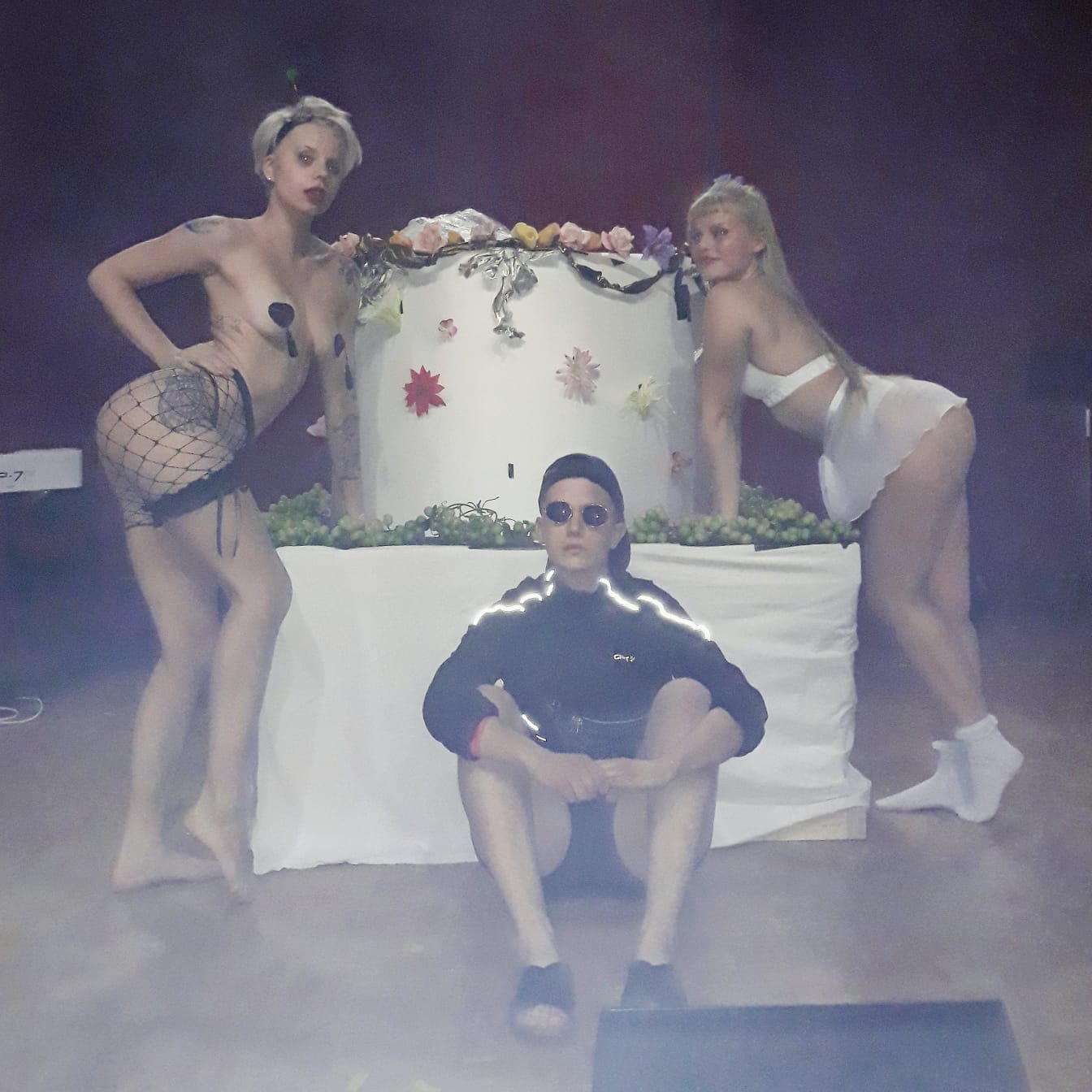 30 September 2018 I went to the afterparty of the gala celebrating the 75th anniversary of the Degree Programme in Acting at the Theatre Academy of Finland to see a performance related to sluttiness by a group of my fellow students from the academy called Slutartists. I’ve become familiar with their aesthetics by following them on Instagram and I wanted to see their show Pie Girl which they had described as ”a pornographic cake stunt”.

The party took place in the main building of the Theatre Academy of the University of Arts. I hadn’t seen the place with so many signs of glamour before: there were red carpets, evening dresses and black suits, elegant hairdos and all that.

The three sluts got on stage in the late hours of the party: one of them was wearing fishnet shorts, G-string and tassels, another one was in a white G-string, a tiny skirt and a bra, all see-through, and the third one was wearing a cap, a jacket, boxers and lopsided sunglasses. While waiting for the performance to start and watching the almost naked people on stage making their last preparations I heard a young, presumably female voice behind me asking rhetorically, ”So is this what #metoo has led to?”

There was also a big cake made out of cardboard. Just before showtime, one of the performers  gave a trigger warning about the pornographic content of the piece. They informed the audience where to go for the next ten minutes, if they didn’t wish to see the show. We were also told that the performers didn’t get paid for doing the performance, so tipping was welcomed.

Pie Girl had two acts and an encore. In the first act, two sluts jumped out of the cardboard cake, danced around in a sexual way and mimicked sexual acts such as oral sex. It didn’t seem to be choreographed, at least not precisely. The third slut still sat on the floor next to the cake and gazed at the audience through their sunglasses. The second act featured candles and orifices. With the candles the performers penetrated their own and each other’s orifices and also made up some new ones. At least mouths, nostrils, vaginas and a hole made out of the performers’ arms were penetrated 75 times altogether. At some point, the audience was given another trigger warning: there would be menstrual blood. Apparently one of them was having her period.

The aesthetics of Pie Girl were intentionally trashy. I found the show bold, goofy and especially radical in the glamorous after party environment. This simply was not the way we are used to seeing female and queer bodies at a festive gala: un-aestheticized, uncontrolled and uncompromised. A few days later, I heard that the audience’s reactions were pretty interesting. I set up an interview with the Slutartists to hear about their practice and the reactions to Pie Girl.

”It is a project with a mission to create, widen and finally establish slut culture in the world”, Rantanen explains. ”It is a participatory live art concept with the aim to create spaces devoted to slutting and performance events with the principles of safer space. We arrange workshops, lectures, slut peregrinations, parties and slut explorations into slutting. We all have thematic frameworks on what sluttiness and slut culture are and could be. The frameworks help us to explore it further.”

The safe space practices are the core of the project, they make the politics of the project possible. Haapamäki explains that The Slut Spaces are supportive spaces for people to explore what is their own.

”We do not mean to verbalize it from the outside. It’s not necessary for us to define the sluttiness of others.”

”Every slut is a self-determined individual”, Rantanen continues. ”Sluttiness is on motion and ever-changing. Sluts are in control of the way they explore or express their sexuality. A slut is interested in their own sexuality and well-being. A slut wants to reject requirements and assumptions that come from the outside and find their intrinsic sluttiness by reaching their own boundaries and potential. The community of sluts supports and enables the delving into sluttinessies and the dialogue between all sluts and those who are in the very beginning of their slut journey. Joy and fun are important. We don’t approach this by gloominess or threats, which happens quite easily when you’re dealing with the subject of sexual self-determination. We want to create reality where we want to live by putting it into practice. We want to create reality where safe space is the default setting, not an exception.”

Slutartists state that they want to destigmatize sexuality and eroticism. Although it could easily be seen as a risk for young assumed females and non-binary people performing their sexuality visibly in the patriarchal culture but Rantanen emphasizes that Slutartists are not giving in to that kind of violence and oppression.

”What’s important in this is the thought of living and carrying out this project in the post slut shaming and post rape culture era. We work from the assumption that we won’t be shamed for this or face the threat of violence. We want to make these performances thinking that we are living in an era when such performances don’t inflict negativity towards us anymore, or in general.”

When I ask how near or far this era actually is from the present moment, Pylkkänen  outlines: ”As long as we say that slut shaming and rape culture are here and now, we reproduce them.”

The collective has arranged workshops and parties, for which they have received positive feedback. Participants have shared their personal thoughts and experiences and have been hoping for more. But what do the Slutartists think is the reason for the difficulty of relating to sexually oriented art?

According to Haapamäki, it’s because the sexual norm, or sexual representation, is very formal. Everything outside of the norm is reprehensible.

”That’s damaging from the point of view of sexual or gender minorities, because being different from that fucking narrow framework will never let you be a part of that minimal spectrum of norms.”

”It’s about the society’s obsession with sexuality and limiting the expressions of it”, Pylkkänen adds. ”I also often wonder why sex and violence are always paired. It’s outrageous. And yet violence is the more acceptable one.”

The Reception of Pie Girl

Slutartists define Pie Girl as performance art piece that takes place in the canon of ”a girl jumps out of a cake” performances. Also, the first known event of this kind had the same title. When a performance was commissioned from the group, they thought the content would fit the anniversary party. Nevertheless, some people in the audience were offended by the show on behalf of the gala. They thought that the Slutartists demeaned the party with their bodies.

”Another critique we received was that after the trigger warning, when people realised what was about to happen, about 100 people left the venue”, Haapamäki marvels and finds it a peculiar attitude considering that the trigger warning is meant for people to have a choice whether they want to receive the content or not.

”It still feels like there is some kind of a public attitude that trigger warnings are pointless and they spoil art. And that they somehow spoil the surprise and that it is somehow unnecessary, or that it’s only for sensitive people. I think it’s terrible! Why don’t people want to take trigger warning seriously? This is absolutely essential to us when we want to create safer spaces.”

Some others found the show too marginal to be seen at the Theatre Academy.

”Then even more so it needed to take place right there”, Rantanen comments. ”It is the institution that offers the highest education in performing arts in Finland. We hope for a progressive attitude.”

Several spectators thought the performance would have been better, if there had been a proper choreography.

According to Rantanen, proper choreographies contradict the ideology of the Slutartists, especially considering the politics of consent and listening to oneself.

”In our practice, it’s important that we all have defined individually what eroticism and sexual movement mean to us right in the moment, in the given context. Self-determination and performing without a choreography felt essential. Consent and being in the moment were important for us to reach the individuality we wanted. We did have a score, though. But it seems that our uncontrolled sexuality and the expression of it would’ve been easier to receive, if we would’ve put it into a rigorous form. It seems that people’s mental images, assumptions on what should be, were broken.”

Pylkkänen supposes that the lack of aestheticizing and normative forms had a notable impact on the reception of the piece.

”A corset would’ve made it easier. Our assumed female bodies were so political there!”

After the performance Pylkkänen received a long phone call from a spectator telling how significant the experience had been for them.

”There were a lot of people who were on our side and had fun”, Rantanen says. ”Many came to thank us right away after the performance. Most of the critical feedback we got later. It was surprising that our performance evoked such hate, anger and revulsion in people. We didn’t consider the show shocking. Our aim was not to provoke.”

Pylkkänen tells me of a confused actor with a long career, who didn’t understand the performance and who came to ask her about the Pie Girl‘s relation to #metoo.

”Since #metoo started, the actor had been working a lot for actors not to be considered as whores and for actors to acquire boundaries to protect themselves. Well, their boundaries are different from mine, I replied. It’s common that many people tend to generalize their own boundaries to be universal. They find it difficult to understand that assumed females could voluntarily do something that would stretch or break these boundaries.”

The collective asserts that they did only what they wanted to and underline that in the group negotiation asking for a permission to touch and consent were present all the time. They had a safeword.

”We respected our boundaries and didn’t force anyone to do anything”, Pylkkänen adds. ”We didn’t force anyone to watch us. We aspire for nonviolence. Even so, we got an interpretation that we are victims of violence and Pie Girl was our cry for help. That we must be in a bad way. That we are in a difficult conflict with the society. Well, I guess we are, but not in a way that we would be calling for help in our art.”

Haapamäki highlights the significance of heteronormativity in the reception of the performance.
”It has a whole lot to do with people having gotten used to only certain kind of bodies being exposed. That there is that certain way you are allowed to show your body around. It’s related to the heteronormative way of representing gender. At the Theatre Academy, I’ve seen so many performances in which assumed males touch each other in a way that suggests that it would be somehow provocative and wild for assumed males to kiss or grope each other. This kind of homosocial behaviour is really othering. People don’t see the internalized homophobia in it. Never have I heard that they would be the victims and crying for help – which probably is the case…”

”So, part of the audience affiliated disgrace and violence with our bodies but it was in their gaze, not in our bodies”, Rantanen thinks. ”At least I was having a lot of fun.”

”I was also having fun. I felt powerful”, confirms Pylkkänen.

”The performance actually happened in the reactions of the audience”, Rantanen concludes.